In a text to residents, Denise Pedrow, failed candidate for California Assembly District 44, shared a post that states, "had a hunch that our VCBOS would be considering if they should follow the example of LA and Santa Barbara counties." 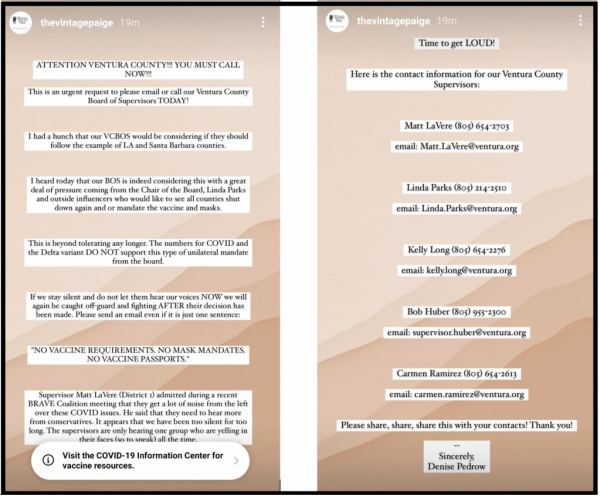 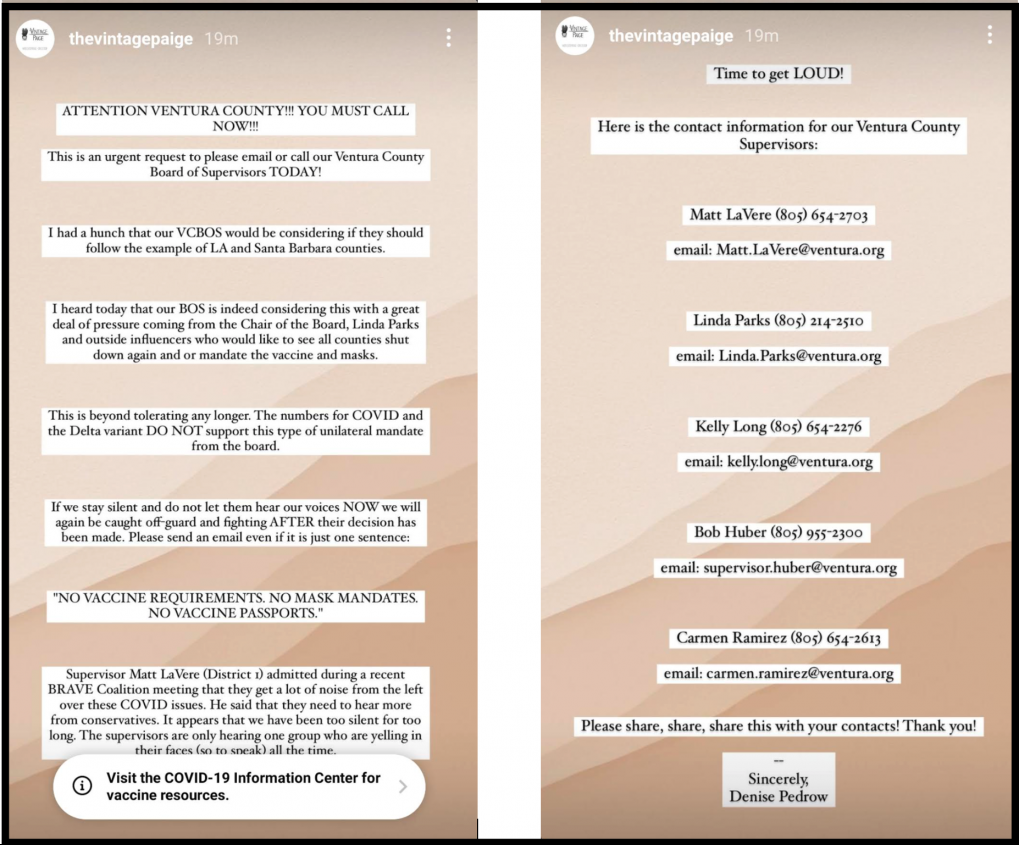 It goes on to claim, "I heard today that our BOS is indeed considering this with a great deal of pressure coming from the Chair of the Board, Linda Parks and outside influencers who would like to see all counties shut down again and or mandate the vaccine and masks."

These assertions have no basis in fact. The Board of Supervisors does not "follow the lead" of Los Angeles and Santa Barbara counties, and Parks has not pressured the Board.
Here is what Ventura County is urging:
Due to the current surge, Ventura County Public Health (VCPH) is urging all Ventura County residents that are eligible but have not yet been fully vaccinated to get vaccinated as soon as possible. In alignment with state and federal health authorities, VCPH officials also continue to strongly recommend mask wearing indoors in public places regardless of vaccination status. While Ventura County continues to be aligned with the California Department of Public Health (CDPH) and the Center for Disease Control and Prevention (CDC) guidance on masking, which recommends that everyone regardless of vaccination status wear masks indoors, and that requires those that are not fully vaccinated to mask indoors, officials are closely monitoring the current surge in case additional mitigation measures are needed.

The Ventura County Public Health's urging, recommending, and monitoring are not the same as ordering, requiring or mandating.

Nevertheless, many recipients of Pedrow's message were moved to flood the inboxes of all the supervisors with the message: "NO VACCINE REQUIREMENTS. NO MASK MANDATES. NO VACCINE PASSPORTS."

For an in-depth discussion of the bogus claim of vaccine passports in Ventura County, please see Honesty Counts #4 "Vaccine Passports?"

For a discussion of how to misdirect, as Pedrow has done here, read on. Misdirection is the magician's tool of directing their audience's attention away from their trick so they don't notice what is happening right before their eyes. Misdirection works because of a psychological phenomenon called inattentional blindness.

Pedrow repeats the message about having "had a hunch" and "heard" something that everyone is extremely concerned about--COVID-19. So it's no wonder the hyperbolic claims that followed were what everyone on the receiving end of this message paid attention to and acted upon. Its own words are the cue that there was no evidence to back the untrue claims. Anyone can misdirect other's attention this way.

Abe says, "I had a hunch, I heard today, people are saying INSERT CLAIM HERE."